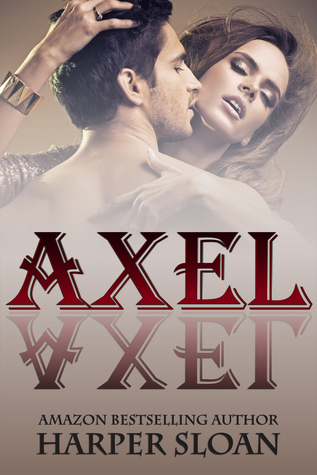 This book was sitting on my Kindle just waiting to be read. I kept looking at it, thinking it’s next but I still had books I’d had for longer, so it kept getting kicked down the list. I had started another book and then thought…screw it, I’m reading Axel.

Axel is part of a security group of former Marines. He’s extremely alpha, arrogant and loves his “brothers”. When he assigned to protect his brother, Greg’s best friend he comes face to face with his past. With the only girl he has ever loved. He’s not only shocked to see Isabelle but also very angry since she left him with no way to contact after he got back from his Marine training.

Isabelle has loved one man in her whole life. They were high school sweethearts and promised they would be together forever. After Axel left for boot camp her life took a terrible twist. Her parents died in a car crash and she had to relocate to live with her grandparents. She wrote to Axel many times at the base where he was stationed but the letters came back stating he wasn’t stationed there. She sent letters and the address of her grandparents’ home to his foster parents’ house so he could find her when he came back. She later found out from Axel’s foster mother that he was dead. Weeks later, she found out she was pregnant and then miscarried the baby.

This story is filled with lies, misunderstandings, loss and forgiveness. Two people who were meant for each other finding their way home. It also has a great secondary cast of characters. I loved every single one of them. It shows us that not always having the facts can make us do things very much to our own detriment. But it also shows us that when things come full circle they are truly worth waiting for.

This was my first book by Sloan Harper and I’ve already downloaded the next two. This is one of my favorites of the year so far. It has everything you need, good story, good characters, a foul mouthed hero and hot sex.

I have a couple of my favorite lines from this book. I’ll leave you with them.

When that day comes I hope Karma has some fun with that bitch, Fate.

After everything she has done, parading around with my vagina smiling at the world is a small price to pay.

2 thoughts on “Axel by Sloan Harper”