This is why you need to be reading the dragon books by G.A. Aiken:

“You best go to him, sister, and soothe his hurt feelings.”

“You know how men are.  If you treat them nice and buy them gifts, they will suck your pussy like a champion.”

Seriously, no one does over the top humor like Aiken.  When I need to read a foulmouthed book full of equal parts violence and humor along with some hot sex, the Dragon Kin series is the place to go.  I’ve got kids, and I’m a pretty polite person, but it’s such a wonderful release to read about these dragon shifters and their mates!

Elina is not unforgettable.  In fact, the Daughter of the Steppes is all too forgettable to Celyn the Charming.  He deposits her in the local jail in the name of keeping her safe and promptly forgets her.  Thankfully she’s still safe there months later when the queen requests to see her.  Events force the human (Elina) and the dragon shifter (Celyn) together and Celyn is shocked that Elina isn’t falling for his charm.  He’s pretty amazed by her self confidence, ferocity, and willingness to use him for sex.  For her part, Elina finds Celyn annoying and far to talkative, but quite convenient for sex.

There’s a culture clash between Elina and Celyn that is quite interesting and entertaining.  In Elina’s homeland, women are the warriors and worthy warriors marry and keep multiple husbands who tend to household and raise the children.  She’s only heard rumors about dragons before.  Elina’s life has been hard, and she’s amazed at the life of laziness and luxury she finds in Celyn’s country.  This made for some nice and humorous conflict between the two of them.

Full, disclaimer, this book is more on the sci fi side than it is romance.  There are quite a few pages devoted to politics and a story arc running through the series.  There are a lot of characters – you need to engage your brain to keep track of them all.  I still loved it!

With all of the characters, I think this book would work best read in order in the series.  That said, I skipped two books and read this one and did ok.  I think the book is must read for people who have enjoyed the series so far.  If it sounds interesting, you can start with Dragon, Actually.  I highly recommend the series.

Note: This is *not* a romance, but it’s an awesome short story that I recommend for readers who have enjoyed the Elder Races series, or even just Pia and Dragos’ story.

Drago and Pia have a son, Liam, nicknamed Peanut.  He’s biologically about 6 months old, physically about 6 years old, and mentally even older.  Oh, and he’s an incredibly cute magical shapeshifting dragon.  He’s maturing very fast, and his parents want him to have some social experiences at a school before he progresses too far beyond his physical peers.  So they send him to first grade.

Most of the story is told in Liam’s point of view, and I really enjoyed his voice.  He runs into situations at school that were a little far fetched, but I’ll accept it as normal in a world that holds dragon shifters.  I especially enjoy the world building and explanation of predator and prey as explained from a young boy’s point of view.

It’s a cute story that could stand alone – I know I have only read a couple in this series and still really enjoyed this one. 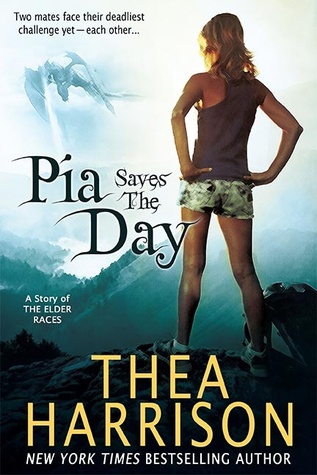 Pia and her husband/mate, Dragos are both shifters.  Dragos is very powerful dragon and leader in the shifter world.  A freak accident leaves him with amnesia and no memory.  He has no idea who he is, only that he was just attacked and injured.  This is a tricky personal and political situation, and Pia needs to step in and save the day.

OK, a long time ago (2011, I believe) I read the first book in this series, Dragon Bound and I LOVED it!  I loved it in that obsessive way where you try to convince all your friends to read it because it’s so awesome and not quite like any book you’ve read before and it just makes you feel gooey inside.  And then along came book 2, Storm’s Heart.  For whatever reason, I decided to listen to it instead of reading.  And I really didn’t like it.  I quickly grew frustrated with it and didn’t even finish it.  I moved on with my life and was a little sad that such an incredible first book had such a sophomore slump to follow it, but there were plenty of other books to be read.  Over the years I was aware that other books came out in the series, but I didn’t pay much attention.  I thought now and then that maybe I should give it another try, but I never acted on that until I saw this novella about PIa and Dragos!  Hooray!  I’m in!

I was a bit surprised when I checked in on Goodreads and saw I’d missed another Pia and Dragos book and a novella right before this one.  Sheesh.  I wondered if I’d even be able to keep up.  But I really had no problem jumping right back into things.  I think this book would stand alone, even without reading Dragon Bound.  My memories were hazy, but it still worked for me.

Dragos is powerful, and with only fundamental memories he’s very vulnerable and dangerous.  Pia is determined to help him, even if he can’t remember her.  It’s a great story.  It’s even sweeter when Dragos falls in love with Pia again and finds himself jealous of the original Dragos!  It’s a quick, sweet, hot read I highly recommend – and now I want to go back and read the whole series again!

Have you read this Elder Races series?  Are you a dragon shifter fan?  If so, any books to recommend?