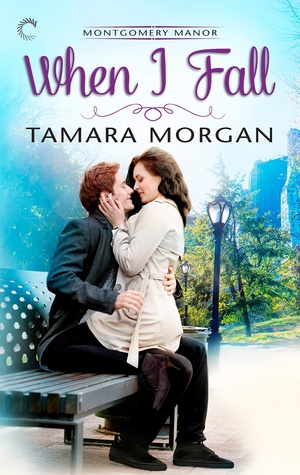 When I read the blurb for this book, I was really intrigued.  I wondered if I could enjoy a story about a character who seemed to have no redeeming qualities.  Becca is a socialite in all the tabloids described in the book blurb as getting through life one vodka tonic at a time.  When all cameras are on her at a night club she finds an unexpected savior in Jake, her older sister’s step son.  (That’s right, Becca is Jake’s aunt, if you’re keeping track!)  So, I dove into the book wondering how I’d feel and if the author could make me sympathetic to Becca.  I’ve really liked other books I’ve read by Tamara Morgan, so I was hopeful.

Then I started reading, and it got worse!  Not only does Becca try to drink herself into a stupor in order to try to sleep through the night, but Jake turns out to be a total wastrel.  That’s right, I’m using a historical term in contemporary romance, but it totally applies!  Jake drifts through life.  His family is loaded and he’s always had more money than he knows what to do with.  He’s never held a job and he’s involved in one scandal after another.  It got so bad that his father cut him off and he’s been couch surfing with friends who are willing to pay his way at clubs.

When he sees drunken Becca at the club, he does step in to minimize the damage.  At the same time, he’s thinking to himself that taking Becca home will probably give him a place to sleep for the night, as he’s getting tired of the friend he’s staying with.

So these characters are not very likable to me.  At all.  But that’s when the magic starts to happen.  The more I learned about Becca, the more I understood her and felt for her.  I never had quite as much sympathy for Jake as I did for Becca, but he turns out to have a huge protective streak for Becca.  So by page 85 I knew pretty much all their dirty laundry, and I was totally rooting for them.  It wasn’t just my sympathy for Becca and Jake that turned me around, it was that they were incredibly honest with each other.  Becca knew Jake needed a place to stay and he didn’t try to hide it.  They were very open with each other, and it was wonderful!

Even though I’ve said the characters aren’t very likable, there was a lot I liked about them.  I didn’t like how they’d chosen to live their lives – basically not doing any productive work and just creating scandal and partying.  I did like who they were.  Jake was very loyal to his family and very protective of Becca.

Becca was very honest about who she was.  She was sexually active and not ashamed about that.  I know there may be some romance readers who will have a problem with that, but I really enjoyed it.  Becca also turns out to be a lot stronger than she appears.  I would have had problems with this story if Jake had been the magical thing to make Becca better.  By the end of the story I was confident that Becca would have taken care of herself just fine without Jake.  Her life was better with him in it, but he didn’t save her, and I liked that!

The sex in this story is really hot and really well written.  There’s a lot more anticipation than there is sex, but when you get it, it’s worth the wait!

This story is also filled with humor, and a lot of it is pretty raunchy.  I loved that!  Becca has quite a potty mouth, and that seemed totally in character.  For example, here’s Becca’s reaction to seeing a crotch shot picture of her taken at the club the previous night printed in the paper:

“I like how they blacked my twat out with a star, “ she mused, tilting the picture so that her legs were vertical to her line of vision.  “It’s so much more exciting that way.  Like the force of my vulva cannot be contained.”

The worst part of this story for me was how sad Becca’s life was.  She was grieving a friend and depressed.  It was so horrible it was making me sad reading it, and I wondered how she could possibly be in a place to start a relationship – even a fake one!

I was also pulled out of the story at times by the many point of view changes.  It happened a lot and was hard to keep up with.

This is the second book in the Montgomery Manor series.  I didn’t read the first one, and I had no problem keeping up.  Tamara Morgan continues to write wonderful and witty contemporary romance!  She’s pushing herself up my favorite authors list!

Grade: B-
Hotness Level: Inferno
Kink Level: No Kink
Genre: Contemporary
Series: Billionaire Boys Club #4)
Published: 4/15/14
Reviewed by Anne
248 pages
Griffin is not just a billionaire, but a member of the royal family in Monaco-like country in Europe.  He’s pretty proud that he has just one staff member, but as it turns out he relies heavily on that assistant to do everything for him.  When this assistant is too sick to attend to him on a trip back to his home country, he finds himself desperate enough to accept his friend’s offer of lending his assistant, Maylee to Griffin for the trip.
Maylee is a small town southern girl who still hasn’t lost her accent or her Golly Gee! outlook on life.  As it turns out, though, she’s an incredibly good assistant and Griffin comes to rely on her.  He’s as rude as he is good-looking, though, so it’s a good thing Maylee has a thick skin and is determined to complete this assignment for the money it will let her send home to her family.
My initial impression was that Griffin was an asshole.  Unfortunately that changed very little during the book.  Maylee walked the line of being TSTL.  Had she not been extremely competent, I wouldn’t have been able to forgive her actions on the plane when she met Griffin for the first time.  As it turned out, Maylee saves this story.  She’s aware that she’s a little backwoods country girl, but she also knows what she’s good at, and she knows that Griff needs her.   Griffin might be incredibly rude to her, but that doesn’t make her feel bad about herself, and that was wonderful to read!
This would have been an A read, but the last few chapters of the book just felt really rushed to me.  I thought MayLee and Griffin had issues to talk through that couldn’t be solved by grand guestures.  I cheered every time Maylee made a stand for herself, so I cringed a little bit when their problems resolved themselves the way they did when she returned to New York.
It especially bothers me that she ends up being completely dependent on him.  It bothers me because, while I’m convinced he loves her, I’m not convinced that he won’t trample all over her feelings and keep thinking he’s better than her.  They’ve got a lot to work through and it leaves me uncomfortable feeling like she’s really stuck with him  – and she’s given up trying to do anything independent.  (Yes, she mentions a business she’d like to start, but I find that improbable, because she’s never mentioned it before this and has no business experience.
All that said, I know I’ll keep reading Jessica Clare.  I adore her sense of humor!  Harry Potter references always win with me!  Maylee and Griffin do a pretty good job communicating with each other about sex, even if they don’t talk enough about their relationship.  Jessica Clare has all the elements I like, even if this wasn’t a favorite read for me.