Grade: B-
Hotness Level: Inferno
Kink Level: No Kink
Genre: Contemporary
Series: Billionaire Boys Club #4)
Published: 4/15/14
Reviewed by Anne
248 pages
Griffin is not just a billionaire, but a member of the royal family in Monaco-like country in Europe.  He’s pretty proud that he has just one staff member, but as it turns out he relies heavily on that assistant to do everything for him.  When this assistant is too sick to attend to him on a trip back to his home country, he finds himself desperate enough to accept his friend’s offer of lending his assistant, Maylee to Griffin for the trip.
Maylee is a small town southern girl who still hasn’t lost her accent or her Golly Gee! outlook on life.  As it turns out, though, she’s an incredibly good assistant and Griffin comes to rely on her.  He’s as rude as he is good-looking, though, so it’s a good thing Maylee has a thick skin and is determined to complete this assignment for the money it will let her send home to her family.
My initial impression was that Griffin was an asshole.  Unfortunately that changed very little during the book.  Maylee walked the line of being TSTL.  Had she not been extremely competent, I wouldn’t have been able to forgive her actions on the plane when she met Griffin for the first time.  As it turned out, Maylee saves this story.  She’s aware that she’s a little backwoods country girl, but she also knows what she’s good at, and she knows that Griff needs her.   Griffin might be incredibly rude to her, but that doesn’t make her feel bad about herself, and that was wonderful to read!
This would have been an A read, but the last few chapters of the book just felt really rushed to me.  I thought MayLee and Griffin had issues to talk through that couldn’t be solved by grand guestures.  I cheered every time Maylee made a stand for herself, so I cringed a little bit when their problems resolved themselves the way they did when she returned to New York.
It especially bothers me that she ends up being completely dependent on him.  It bothers me because, while I’m convinced he loves her, I’m not convinced that he won’t trample all over her feelings and keep thinking he’s better than her.  They’ve got a lot to work through and it leaves me uncomfortable feeling like she’s really stuck with him  – and she’s given up trying to do anything independent.  (Yes, she mentions a business she’d like to start, but I find that improbable, because she’s never mentioned it before this and has no business experience.
All that said, I know I’ll keep reading Jessica Clare.  I adore her sense of humor!  Harry Potter references always win with me!  Maylee and Griffin do a pretty good job communicating with each other about sex, even if they don’t talk enough about their relationship.  Jessica Clare has all the elements I like, even if this wasn’t a favorite read for me. 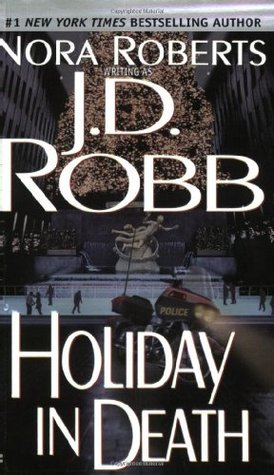 Eve Dallas’ latest case involves dating services, ritualistic murders and Santa Claus. Yes, I said Santa Claus. The city’s latest killer dresses as Santa to gain entrance to his victims’ homes. When he gets into their homes, he rapes, sodomizes, murders, cleans, does their make-up and poses them. He also leaves a piece of jewelry in the “12 Days of Christmas theme with the victims.

Eve and her team, Roark, Feeney, Peabody and McNabb find out that all the victims used a dating servicce called Personally Yours. As they try to track down this killer, Eve has to deal with Christmas shopping, a horrible fight with not only Roark but also with Peabody. As the clock winds down, the intensity of the case takes a toll on Eve both mentally and physically.

This was my favorite of the series so far. I loved everything about it. The bantering and pulse pounding suspense were fantastic. This series still manages to not only hold my interest but keep me fully engaged. A lot of emotions took place in this book. Eve had to face a lot of things that she wasn’t necessarily ready for. Now, me, I’m ready for the next book.