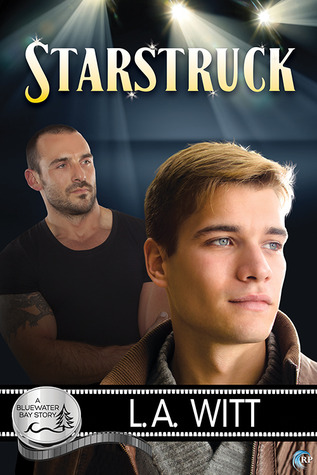 Levi is a retired action star who has spent his entire life in the closet.  His parents have made it clear they couldn’t accept him if he was gay and he’s sure that Hollywood couldn’t handle a gay action star.  That’s part of why he retired – he was tired of all the prying eyes and lying about himself.  But then the role of a lifetime lands in his lap.  It’s gritty and complex and pretty much the part he dreamed of playing when he was stuck in his action star roles.  Not to mention, it’s a recurring role on a tv series he loves and it’s being filmed in his new small town.  As if that weren’t enough, the director is a friend of his, and Carter Samuels, a younger actor Levi has admired is on the show and Levi would have a lot of screen time with him.  So, even though taking the role means agreeing to stay in the closet, Levi goes for it.  He didn’t  plan on the attraction between him and Carter.

If you follow my reviews, you know that I really enjoy a low conflict romance, where all the conflict is inner conflict.  It’s all about people building a relationship and learning to live together in a partnership.  Starstruck falls in this category.  The main conflict is if the guys will act on the attraction they feel.  And if they do, how will they handle it?  Will Levi come out?  Will Carter agree to keep their relationship a secret?  How will it work out?

Watching these guys fall for each other as friends was fun.  I enjoyed the other characters in the book, but appreciated that the focus was pretty tight on Levi and Carter.  I didn’t even suspect this was a series until I looked up information on Goodreads after I was done reading.  It didn’t feel like there was obvious sequel bait, so that was well done.

This is the first in a new series being published by Riptide Publishing.  The books will come out quickly – five stories are scheduled to be out by January – and will be written by a few different authors but set in the same world.  I really enjoyed Riptide’s Tucker Springs series written in the same way, so I’m looking forward to the rest of these stories!  They look like they’re all centered around a tv series based on a very popular book series about werewolves.  It’s easy to picture and that was an interesting aspect to this story as well.

I’d highly recommend this story to anyone who enjoys m/m romance!  I can’t wait to read the next one!  This is one of a few books I’ve read with Hollywood famous characters.  Do you have any to recommend?