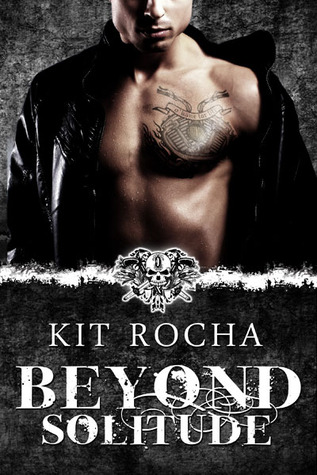 Grade: A
Hotness Level: Inferno
Kink Level: No Kink
Genre: Dystopian
Series: Beyond #4.5
Published: 4/1/14*
Reviewed by Anne
Pages: 126
*Note: This novella is part of the Alphas After Dark Anthology. The authors report that the anthology will be on sale for 99c in April and after that the novella will be priced at $2.99
So, just as I was finishing up with my review of Beyond Jealousy, I was lucky enough to get this ARC of Beyond Solitude.  I devoured it!  It takes place at the same time as Beyond Solitude, but could easily be read first.  In fact, this one probably stands alone better than any of the stories in the series besides the first one.
Derek Ford is a member of the O’Kane gang.  Unfortunately a broken leg and old fashioned healing has left him tied to his desk a whole lot more than he likes.  One day he’s surprised to discover Mia in his office.  She’s new to the sector and she’s not an O’Kane, but she’s got ties to Lex, the O’Kane queen.  Lex gave Mia a job – she’s supposed to help Ford out with his office work.  Ford is grumpy and not appreciative of Mia invading his space, but Mia’s determined to make things work.
I showed the following quote to pretty much everyone in my bookclub trying to convince them to read this series!

“I need a job. If you don’t want me to mess with your files, fine—”

She didn’t falter, didn’t even blink. “Then tell me what to do instead.”

If I were an asshole… He waved the bottle of whiskey at her. “You could start by letting me drink half of this and jerk off so I can get some sleep.”

That snapped her teeth together—for about five seconds. “If you’re self-conscious about doing that with me in the next room, I could take some work home.”

“Self-conscious?” He dropped the bottle on his desk and unbuckled his belt. “I’ll lay it out right here, buttercup, if you like to watch.”

Her gaze flicked to his hands, and he got that flash of tongue he’d been waiting for as she wet her lips. “I wouldn’t be watching. I’d be working.”

Filing papers like there was nothing more interesting going on? Fuck that. “Bullshit.” Ford tugged open the top button on his jeans. “It may be a little battered these days, like the rest of me, but my ego’s not dead. If I start stroking my dick right in front of you, you’re damn sure gonna be paying attention. Not just watching—riveted.”  p.7

This is on page SEVEN!  And really, the story starts on page 5, so it’s really like page 3…  It’s one hot story.
It’s also got one of the things I like most about the Beyond series – strong women who support each other.  Mia has issues.  She’s working through them, but it’s really important for her to stand on her own.  That means falling for her new boss causes her some problems.  The real conflict in this story comes when Ford doesn’t understand why it’s a problem for him to be her boss and lover.  The way he makes it up to her is one of the most memorable “I’m sorry” gifts I’ve ever read, though!
This story could probably be read anywhere in the series, as it stands alone really well.    It’s tamer than most of the other stories, too, as Mia and Ford aren’t really interested in the orgies or PDA that the rest of the O’Kanes enjoy so much.  So, it might even be a good entry point.  I highly recommend it, and even though I got a review copy of this short story,  I’m still going to buy the anthology.  For 99c it’s hard to turn down!