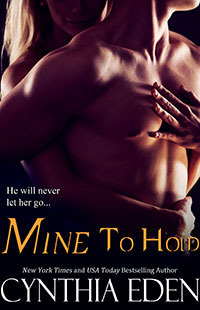 Claire Kramer is a complex woman. Considered fragile but also cunning. She’s either broken or a calculating seductress. She has lost everything. Her mom and dad, her sister and for a moment, her sanity. After being in an abusive relationship, she found the courage to leave him. This led to the death of her parents by her ex. Then she lost her sister to murder. She doesn’t like to be touched but Noah York wants to touch her, badly.

Noah York is a hotel chain owner, ex-military and a womanizer. He met Claire three months ago and has never forgotten her. He has his own demons to overcome. His own darkness to conquer. He only cares about his two friends and now Claire. She fills this need in him and he can’t explain it. When she is stalked, he takes over her life.

I love this series. It has everything I really love. Suspense, really bad, bad guys, sizzling love scenes and a consuming love story. I have to say it again, please Cynthia Eden, never stop writing romantic suspense. This is totally your genre. These two characters had my interest at the close of her previous book and I was looking forward to their story. Now, I want Drake’s story. Soon!