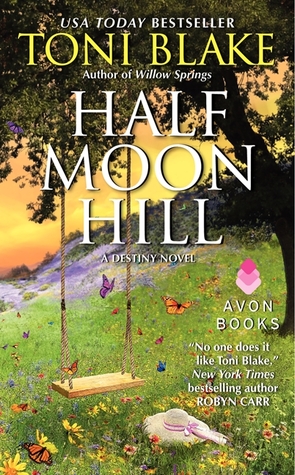 Anna Romo is the sister of Mike and Lucky. She disappeared when she was young and reappeared some twenty years later, trying to reconnect with the family she lost. She was kidnapped by a woman who wanted a child so badly she was willing to steal someone else’s. We first met Anna in the last book, when she tried to take Amy’s man. She bought an old Victorian style house on the outskirts of Destiny. She has plans to turn it into a bed & breakfast. She has done all the interior work herself but needs to start on the exterior, where she’ll need some help.

Duke Dawson is her brother’s best friend and she finds him living in the woods by her home. Duke is an ex-biker with baggage and a very noticeable scar. He agrees to help Anna do the exterior and the unlikely couple start a physical relationship. He doesn’t want anyone to know he’s in Destiny and she helps him keep his secret.

I had to make myself get into this book and I’m glad I did. I love the other books in this series but I really didn’t like Anna because of her behavior in the last book. I wasn’t crazy about Duke either in this one because he was kind of an ass and a pussy. He treated Anna badly I thought, regardless of his reasoning. Their love built slowly and the love scenes were steamy. But in my opinion, the real love story was between Cathy and Robert. Cathy was the girl who grew up in the house Anna bought and Robert was her first love. I was transfixed by their story with its innocence and purity. When I found out what happened to each of them, I bawled. Tears just rolled down my face. So to make a long story long, I ended up really liking the final book in this series. Anyone who loves small towns and the stories that come with them, should read the Destiny series. It’s with a heavy heart that I recommend it, as I am very sad to see it all end.