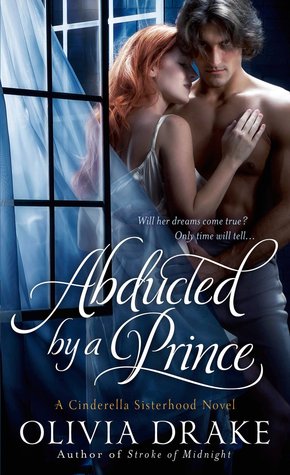 Raised by a guardian who died shortly after he started at Eton, Damien’s one clue to his parentage, a key, was stolen by Walt.  Now as an adult, Damien is desperate to find out who his parents were.  So he hatches a plan.  He will kidnap Walt’s sister and hold her hostage until Walt delivers the key.  What could possible go wrong with that plan?  Except he accidentally kidnaps Walt’s unwanted cousin instead.

Once I got past the fact that such a level headed man could come up with such a foolish scheme, this book worked for me on so many levels. A hint of fairy tale without being an outright retelling.  Deep characters.  An intriguing plot.  I couldn’t stop turning pages. I’ll be reading the first two books in this series soon.  If you like fairy tales and historical romances, give this one a try.

This historical was has put me in the mood for more historical romance.  Do you have any recommendations?

Grade: B
Hotness Level: Blaze
Kink Level: No Kink
Genre: Fairytale
Reviewed by Anne
97 pages
This short story retelling of Rumplestilskin as a romance has Juliana as an affluent aristocrat at the mercy of an evil prince and “Rue” as the golden fairy she calls on for help.
It’s a great fairytale romance! I loved this twist on Rumplestilskin. I’m not an expert on politics or fairytale age settings, so I don’t know if the ones in this story were realistic, but I enjoyed it. Juliana was a heroine I liked and Rue had a lot of depth for a character in a novella. It was a nice balance of story and sex and even a battle. If you enjoy fairytale retellings, I predict you’ll like this one.

Two people meet at a masquerade ball and engage in a night of unforgettable sex. Ash, the hero, is a business mogul and keeps his heart to himself. Charlotte, is an orphaned girl raised by her hateful stepmother. This should’ve been a terrible mismatch but instead it was a fantastic love story with a fairytale twist.

After their night of sex neither of the two main characters can forget the other. Too bad they don’t know who the other is. Charlotte goes to an interview for a job at Ash’s company and they recognize each other because of the rose she left at the scene. Charlotte gets the job and she pays for it when she gets home. Her stepmother and stepsisters make her life a living hell. She has no place to go and is basically their slave. Her only bright spot is her step grandmother, who she adores and the feeling is mutual. Charlotte has to decline the job because of her grandma’s Lupus but Ash won’t let her go.  Ash knows she’s the real deal and lets his heart open up. Ash has been burned before both literally and figuratively. He even has the scars to prove it.

This was a great read and spin on a mix of Beauty and the Beast and Cinderella. I loved every second of it. My one and only complaint was, in the middle, it drug for about 10%. It picked up from there and it was back to being wonderful. It is going on my best of 2013 list.