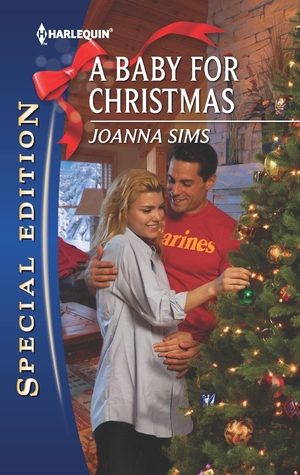 Luke is a wounded war veteran heading home to his family’s ranch to recover.  But he dreads what is waiting for him-his twin brother’s pregnant widow Sophia.  Luke’s twin Dan died in the war right before Sophia found out she was pregnant.  Luke is determined to be a part of the baby’s life, even if it means battling the ten year attraction he’s had for Sophia.  With Luke’s parents and brother away visiting family for Thanksgiving, Luke and Sophia must deal with each other without the buffer of family to help them deal with their feelings.

There were a few things that called me to this book.  First off, it’s that time of year and I was looking for a Christmas read and my library kindly provided a basket filled with Christmas romances for my perusal. When you throw a baby into the mix, I was pretty much hooked before I had even read the back of the book.  I was a little hesitant about it being a one-brother-then-the-other book thought.  I’ve read that before in historicals where it was written as more of a marriage of convenience and it worked for me, but I wasn’t sure how I would feel about it in a contemporary framework. It turns out it didn’t work as well for me as the historical setting did.

To start with, the angst of both Sophia and Luke really drove this story.  Sophia is 8 months pregnant, which means her husband (and Luke’s twin) has been dead for less than 8 months.  They are both still morning and coping.  Neither one has started to move on yet.  So there’s just a lot of emotions with this story.  Luke’s family (when they get back after Thanksgiving) is extremely accepting of the idea of Luke being with Sophia.  They’ve all know he’s been in love with her for years.  I found that a little hard to swallow.  But my biggest complaint (and I know it won’t be a factor for some of you) is that there is only one sex scene, and it starts on page 203 of 219 and ends on page 204.  It is only 19 lines long-and some of that is dialog.  I just wanted there to be more (and for it to be hotter)!

But all my complaints aside, if you’re looking for an emotional Christmas read this is one for you.

One last note:  The title A Baby for Christmas makes me a bit mad because the baby ends up not arriving until New Years.  Does that kind of thing bother anyone else?