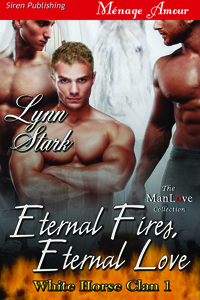 After the death of their mate and children almost 50 years ago, Ian and Malcolm, (a vampire) haven’t been as close as they once were.  Ian (a warhorse shifter) has been lonely but content to stay alone, but now he’s feeling the need to gather mates and form a herd once more.  And Malcolm keeps reminding him how much he needs that bond.  When Malcolm and Ian catch the scent of their mate, they discover Danny, a younger (in shifter terms) gibbon shifter, and the hope that maybe they can have that deep connection that comes with a mated triad once again.

I find it hard to write a review comparing this book to others that I’ve read because there was so much uniqueness with this one.  I’ve never read a m/m/m menagé before, much less one set in a paranormal world.  So I’ll share my 5 favorite things about this book.

While I know that this one won’t work for everyone, I’m really in love with it and I can’t wait to read the second one!  If you like menagé, m/m, or paranormal romances I suggest you give it a try.  If you’re like me and enjoy all three of them, this is a trifecta of goodness just waiting for you to read.

The premise of this one is kind of out there, but it really worked well for me.  What’s a premise that sounded outlandish but you really ended up enjoying?