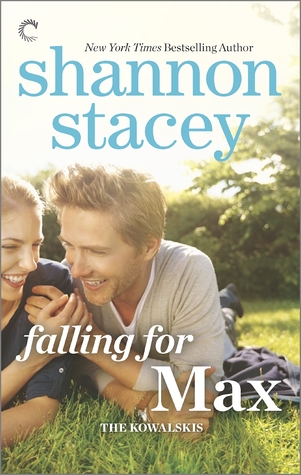 The latest rumor about Max Crawford in the town of Whitford is that he just might be a serial killer, what with his mysterious locked up basement and all.  No one really believes it, but they know so little about him that they settle for gossip.

Tori Burns is a part time waitress at Whitford’s Trailside Diner.  When Max decides it’s time to start looking for a wife, his first step is to be more social, and going to Trailside is where he starts.  He and Tori hit it off, but Tori’s only interested in being friends.  Her parents’ bitter divorce has left her convinced that love is not worth taking a chance on for her.  Still, she’s willing to help Max, who is a little awkward socially, practice his dating skills. Now they just have to ignore the chemistry between them and find some eligible bachelorettes in Whitford.

This latest book in the Kowalski Family series was another winner for me.  I enjoyed so much about this story!  The Kowalskis appear as secondary characters, but don’t overwhelm the main plot.

Max and Tori are great characters.  They each have personal obstacles to overcome.  Max is never said to be on the autism spectrum, but that would be my guess about him.  Social situations can be challenging for him.  He’s very literal and very focused.  He’s looking for a wife, and Tori sees right away that he needs someone who will appreciate his differences and not see them as drawbacks.

Tori comes with a lot of baggage from her parents’ divorce.  She’d always thought they had a loving marriage.  So when it fell apart and they became extremely angry and bitter she was shocked.  Even more surprised when she found herself in the middle of an emotional tug of war between them.  It got bad enough that she moved to Whitford to put some physical distance between herself and her parents.  Aside from her baggage, Tori’s an interesting woman.  She designs book covers and websites, working from her apartment.  She works part time at the diner to indulge her social side.  She also enjoys being with her cousin, the young chef at Trailside.

Besides the characters and the low conflict plot (my favorite!) Shannon Stacey’s trademark humor is in abundance.  There were so many lines that had me laughing.  Here’s an example I love!  Tori and Max are practicing small talk.  She starts:

“I like to play Bingo.”
He didn’t even hesitate.  “That’s wonderful.  How many cats do you have?”

As much as I enjoyed their dialog, I also appreciated how things worked when they were not getting along, too.  They weren’t perfect.  Their reactions were realistic, and it takes growth on both their parts to come through it.  It was a joy to read!

I’d highly recommend this book to readers who enjoy small town contemporary romance, and readers who like low conflict romance.  While it’s part of the Kowalski series, it would stand alone fine, too.  That said, I’m really enjoying the series and looking forward to reading more about Gavin on his quest to become a big deal chef!