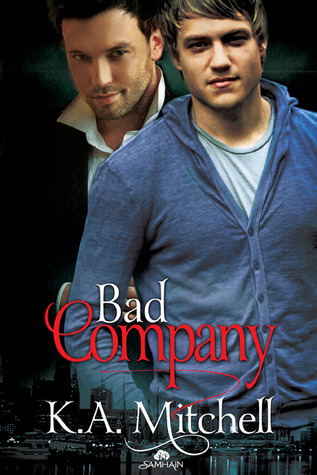 Grade: B+
Hotness Level: Inferno
Kink Level: No Kink
Genre: Contemporary, m/m
Series: Bad in Baltimore #1
Published: 6/7/11
Reviewed by Anne
154 pages
Kellan and Nate were best friends as boys… up until right before freshman year of high school, when Nate trusted Kellan enough to tell him he thought he was gay, only to have Nate turn around and help a group of boys bully him at school.  Then their fathers had a falling out at work, and Kellan’s family is pretty much responsible for ruining Nate’s life.
It’s been years since that happened, and Nate’s now a successful newspaper editor and advice columnist, but Kellan is still a sore spot with him.  So he’s shocked to the core when Kellan approaches him in a gay bar asking for his help getting back at Kellan’s dad.  Kellan wants to make his dad think Kellan is gay, and having Nate be his boyfriend would make it even harder on Kellan’s dad.  Kellan is quite an asshole, but he persuades Nate to play along, but then confuses them both with his curiosity about all things gay, his ever decreasing asshole-ish behavior, and the feelings he seems to be developing for Nate.
What a great read!  Right now I’m fairly new to m/m books and I’ve been working through recommendations others have made of really good books.  It’s a great place to be, reading one good book after another!  Oddly, Bad Company was a book that had mixed reviews.  I’d read that book two in this series was incredibly good, but not so much this one.  So, I actually read the second book, Bad Boyfriend, first.  I really liked it, so I decided to read this one, too.  Maybe my low expectations helped, but I really enjoyed the story!
I loved it when Kellan and Nate worked through issues by Kellan composing oral letters to Nate’s advise column persona.  It was so sweet!  Kellan and Nate were actually both assholes in their own way to each other, and that’s what really created teh conflict in this story.  Their affection for each other was believable, though.  Kellan’s questions and concerns about gay sex seemed realistic.  Watching him figure all of it out was pretty entertaining.
Eli was an interesting character – even though I’d already read his story in Bad Boyfriend.  The causal sexual affection he had for others was a new thing for me.  I’m not sure what to make of it, but it worked for Eli.
I highly recommend this book.  It’s going on my best of the year list!  What older book do you really like and think everyone should read?