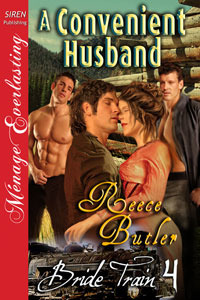 Ben was finishing law school out East. Ben had made a promise to his older twin Ranger though. He promised his gruff brother that he would bring a bride home for Ranger to marry. Leaving things to the last minute, Ben purchases a ticket on the bride train heading to Montana, sure he’ll be able to find a willing bride for Ranger. What he finds instead is Florence, a well educated, out spoken woman with 2 small children in tow. Everything that Ranger doesn’t want in a wife. When one of the children is threatened, Ben marries Florence himself to save the little girl.

So. This book is written by Reece Butler. Right away that’s a point in the plus column. I’ve read every book she’s written and continue to wait anxiously for the next release. And it’s a marriage of convenience, has children, a menage. Plus, plus, plus. At the same time, this book is screwed up in so many ways, I really shouldn’t like it as much as I do (*facepalm* I’ve reread the thing 4 times already).
How is it messed up you ask? Well…Ben is moving to Tanner’s Ford Valley, where a menage lifestyle with three men and one woman is quickly becoming the norm. And despite his 3 brothers (book #1) and his sister (book #3) living in menage relationships, Ben knows nothing about it. Next we have the whole thing with Ranger being so grumpy and crotchety and particular that he’d never be able to find his own wife. Then there’s Ben, who feels so obligated to his brother that he decides to let Ranger take Florence’s virginity rather than doing the deed himself. Yep. You heard me right. Ben and Florence haven’t yet consumated their marriage by the time they reach the ranch, so Ben tells Ranger to go ahead and take care of her the first time (he’s apparently much more experienced with women than Ben is). Of course, Florence has 2 children with her (who aren’t hers by the way). These kids are the perfect soap opera children. Present when they are needed to advance the story.
Conveniently absent (read: away staying with relatives) when they would be in the way otherwise. And let’s not forget Patrick. Poor Patrick. Who really seems to be an addition to the story simply to keep the 3:1 ratio of men to women that seems to be required in this series. Patrick is the youngest brother and just feels like an add on throughout the entire read.
All that being said, you will notice that I gave the story a B+ rating. Simply because I absolutely am in love with it. Despite all it’s WTFery, I have read this book 5 times (the first time, plus 4 rereads). It is one of my favorites in the series, although numbers 1 and 2 are very close.
If you like your historical menages to be filled with strong heroines, hot cowboys, and even hotter sex, (and can forgive the hot mess that sometimes comes with it), give this one a crack.

One thought on “A Convenient Husband by Reece Butler”