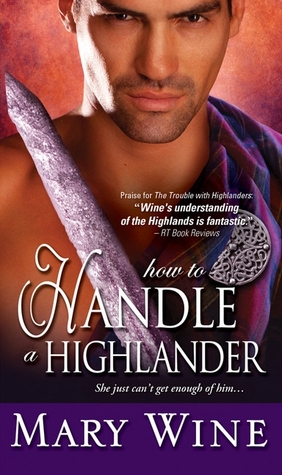 This is the continuing saga of the Sutherlands. They are an overlord family of Scottish Highlanders. This story Is about Gahan and Moira. Gahan is the illegitimate son of the Sutherland chieftain. He was acknowledged by his father so he could be a semi titled man. After his father recovered from the attempt made on his life by the Frasers, they have been obsessed over safety and watching the Frazers closely. Due to this watching, Gahan notices that Bari Frazer is going to marry off his half sister to the Matheson family. This marriage will bring an army with the Frazers against Gahan’s family.

Gahan is instantly drawn to Moira, the bride. Moira’s husband is impotent at his advanced age and therefore their marriage is never consummated. The two start an affair and it causes quite the situation. The story is about duty to your clan, family loyalty and revenge.

I’m a big fan of Mary Wine and I get giddy when she releases one of her Highlander books. My problem with this one has to due with the infidelity throughout the story. I know that they thought back then that a marriage wasn’t a marriage without consummation but the marriage in this book took place in a Church. This left me uneasy. I absolutely do not like adultery in my historical romances. Despite the fact that the story and love scenes were good, my rating was less because of this. I hope this won’t be a continued theme in her following books.