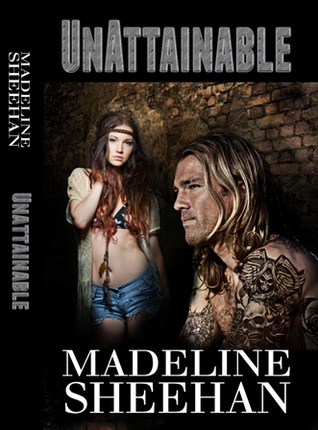 This time we get Cage and Tegen’s story.

Cage is the heir to the MC throne for the Hell’s Horsemen. He’s so much like his dad it’s not even funny. His drinking and whoring definitely rival his father’s. He has always taken care of Tegen. He was her first true friend in the club. These two grew up together and Tegen fell in love with him at age eight and never fallen out of it. Cage is a hot guy, very very hot. Women love him and he takes full advantage of that they have to offer. Over and over again. He has issues with his father because of his childhood and they slowly fester.

Tegen being raised in the club was a horrible thing truly. Her mother was a club whore but only to one biker in particular. She watched her mother love someone who in my opinion never truly loved her. This has taken a toll on both mother and daughter. After high school, Tegen moves to San Francisco to start her career and get over Cage. His selfish and callous ways have hurt her far too much. She isn’t happy, she merely exists.

When Tegen is sucked back into club life you really feel for her because you know what it will once again cost her. She may have changed her looks but she can’t change who or what she is. Cage is there as usual but now he sees her in a different light. As a woman he wants. Can she handle it? This story was heartbreaking at times, just like the other stories in this wonderful series. You also get a story about Dirty and Ellie. Dirty is of course another biker within the club and Ellie is Danny’s friend from high school. Dirty’s story is horrific and their love story is a hot mess. But the way the author writes, just makes it precious. My big compliment on this book is that there is no cheating. Tegen is sleeping with a gut in the beginning but they weren’t committed. So, yay for me.

I can’t say enough about this series or it’s characters or this author’s writing. I’m all in and only hope I can stand it until the next book comes out!