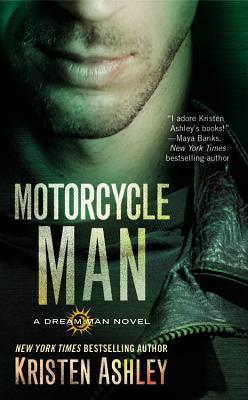 Grade: A-
Hotness Level: Inferno
Kink Level: No Kink
Genre: Contemporary, MC
Series: Dream Man #4
Published: 5/22/12, republished 1/28/14
Reviewed by Anne
324 ebook pages
So I was at book club a couple weeks ago and a bunch of my friends were going on and on about Madeline Sheehan and what great motorcycle (MC) book crack she writes and how they love it so.  For the first time, I was feeling a little left out.  I thought I would not like an MC book.  I was hesitant to read one.  But I don’t like feeling left out, and it was a reading goal of mine to try a Kristen Ashley book, AND I’d just gotten a NetGalley copy of Motorcycle Man, so I figured all signs were pointing toward it being time for me to put on my big girl pants and give this MC book thing a try.
I started reading and was instantly pulled in.  Tyra is in bed after having sex with Tack, who she just met, and is seeing hearts and flowers and thinking that this man, finally, is her dream man.  And Tack?
His hand left my skin to smack my ass lightly before he said, “Time to get to your own bed, darlin.” (p. 17, ePub edition)
*snort*  Not exactly hero behavior!  But Tyra’s got some backbone.  She feels like an idiot for mistaking fabulous sex for love, and for thinking Tack was her dream man, and because Tack is her new boss.  However, when Tack tries to fire Tyra, because he doesn’t mix work and pleasure, she stands up for herself, and she keeps the job.
This book was so awesome.  Tack is an alphole, but a really sexy one.  And the thing is, over and over he proves that he cares about Tyra.   He gives her what she needs, and he apologizes when he makes mistakes.  Of course, he makes lots of mistakes, and one of them is being a sexist, macho, bossy pig of a man, but it’s so easy to forgive him.  It’s totally believable that Tyra would continue to fall for him.
The story line is good, believable, and very engrossing.  There’s a certain amount of suspense and danger, but not enough to annoy me.  The writing style is almost a stream of consciousness, all from Tyra’s point of view, but that worked very, very well.
My only problem with the book is the MC culture.  Women are second class citizens who have no say in the running of the club.  There are “old ladies” and club whores and they each have their place and accept one another.  And though the MC in this story is relatively clean, as far as drug running goes, it’s acknowledged that drug running is a path that other clubs take.  I have so many issues with that lifestyle that I almost feel guilty reading the book.
Despite all that, and mostly because of the alpha hotness and dirty talking that is Tack, I loved this story.  I don’t think MC romance will ever be a favorite of mine, in general, but this book is!  It’s going on my favorites of 2014 list and I highly recommend it!

One thought on “Motorcycle Man by Kristen Ashley”