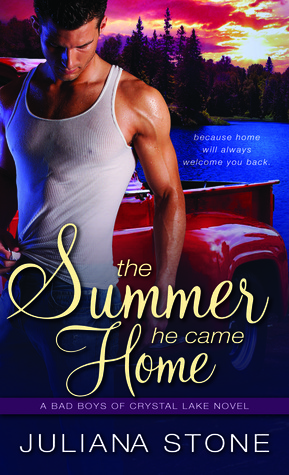 Cain Black was one of the Bad Boys of Crystal Lake. He left town ten years ago to chase his music dream. He’s back now for his friend’s funeral. His future looks pretty good considering his band is about to make it big. He recently got out of a disastrous marriage and was just looking to pay his respects to his deceased friend, then he was moving on. At the funeral reception he sees Maggie and it was love at first sight.

Maggie is a single mother with a young son, Michael. They don’t have much money but she does have a BIG secret. A dangerous secret. She makes her bills by cleaning houses. She lives in a little bungalow that’s perfect for her and her son. She sees Cain and at first she’s frightened but also attracted. She has no time for a relationship with a rock star that will soon be leaving town. She has a son to protect, she tells herself.

I read the second book in this series first and LOVED it. I truly enjoyed this one except for one thing. She’s married. Granted, she’s on the run from her abusive ex but I don’t like to read about adultery. At all. Honestly, it changed how I rated the book. I’m telling you this as a warning if adultery is a hard limit for you as a reader.

Otherwise, this was a great and very sweet book. Their relationship building was fun to read. There’s humor, suspense, sadness and some steamy sex in this story. I would recommend this series to anyone who believes in the healing power of love and I’m eagerly awaiting the next book.