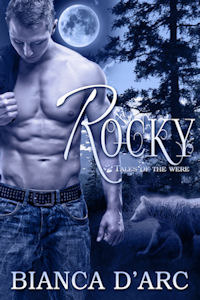 Maggie is pregnant and has been on the run from an all powerful demon mage since he killed her husband Tony months ago. She heads to childhood friend Rocky’s house because she promised Tony she would go there when she was ready to deliver her babies. Rocky, like Tony, is a were-bear shifter, and will be able to provide the leadership that Maggie’s cubs will need. Rocky is more than happy to take on the role of alpha for Maggie and Tony’s cubs, but he wants the role of Maggie’s husband as well.
I’m trying to cut Maggie some slack because she’s obviously emotional and hormonal throughout the entire book-despite being magically healed after her labor by her magical cubs. But I got really tired, really fast of her waffling between Tony and Rocky. It starts off right away with her comparing everything Rocky is with what Tony was. Then suddenly, she becomes certain that Rocky is the one that she’s always been supposed to be with, her true soul mate. Next thing you know, she’s always loved them both, and Tony (in spirit form) is approving of her relationship with Rocky.
But it was the all powerful evil demon mage that was the final straw for me. This demon mage has been hunting Maggie and her super magical, über-rare, twin were-bear cubs (who always sleep when the story calls for it) since he killed her husband. Seriously. Tony was a strong mage himself, so this demon mage must be extra powerful. There’s a lot of suspense built up around this evil demon mage. So in my mind, I’m picturing some kind of cross between Darth Vader and Hannibal Lector. But when the mage finally appears (in the very final pages of the books), Rocky is able to quickly defeat him and only walks away with bloodied knuckles. Such a let down. And makes me question how strong a mage Tony really was if he was defeated by evil demon mage, King of the Wusses.
I need to be up front and admit that this is the first of the Tales of the Were series that I read. And I can’t help but wonder if I would have liked the book more, had I had the world building knowledge that has to be present in the first two books. As it was, I just couldn’t connect with the world that Rocky was a part of. It was just fill with a lot of WTF moments for me.
So, what was your last total fail of a book?