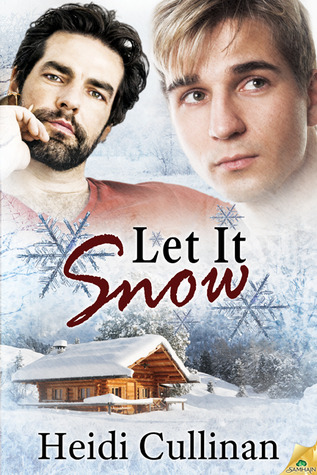 I was lucky enough to get an ARC of Sleigh Ride by Heidi Cullinan through NetGalley.  When I realized it was the second in a series, I decided I wanted to read in order, so I bought Let It Snow for myself.  I’m so glad I did!

In a twist I somehow didn’t pick up from the cover blurb for Let It Snow, there’s a light fairytale twist here on Goldilocks and the Three Bears.  Hair stylist Frankie is driving home from his parents’ house and gets way off track and stops at a diner in Logan, MN for a quick bite to eat and some directions to get him back on the road.  He’s a very swishy gay man, and feels self conscious in this small town where he is unsure of his reception because of his generally obvious sexual orientation.  He’s especially put off by the three burly lumberjack looking guys in a booth at the diner, so he’s happy to set off in his car, trying to beat the storm home.

Unfortunately, he quickly finds himself stuck in a ditch.  I grew up in northern Wisconsin, so I really appreciated the smarts he showed in outfitting himself and trekking down the road looking for rescue.  In true Goldilocks fashion, he finds an empty cabin (oatmeal on the stove!) and settles under some blankets inside on the couch.  That’s where the three lumberjacks/bears find him when they get home from the diner.  Now they’re in the middle of big storm, so they offer him shelter.  As he gets to know them, he no longer afraid of Arthur and Paul, but Marcus’ rude and off-putting ways leave Frankie unsure how to take him.

Marcus is having a hard time getting over how similar Frankie is to Marcus’ ex boyfriend. Frankie is just Marcus’ type, but Marcus doesn’t want to acknowledge his attraction, because he’s still heartbroken over his ex.  It leaves Marcus acting like one cranky bear.

From there it was all about getting to know each other and deciding if they trusted each other enough to show who they really were.  I loved it!  The scenes where Frankie met Marcus’ mother in the nursing home were incredibly sweet.

It’s probably unbelievable that there’s a set up like Logan, MN in real life, but I’m willing to suspend disbelief, especially for a Christmas story, and especially for Heidi Cullinan.   It was a sweet story that didn’t ignore or brush over the harsh realities of life, but left me sure that having the right person at your side can help you overcome pretty much anything.  That’s why I read romance, and that’s what this story did very well!  I’d recommend it to anyone who enjoys m/m romance.