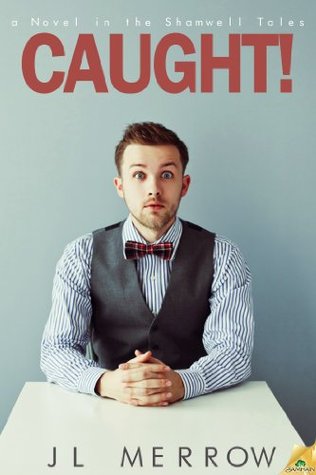 Robert Emeny (Mr. Enemy to his students) is the new teacher in a small town English primary school.  He’s happy to have left his past behind him and settle into this new, less fancy life.  He’s upper crust, wears a bow tie every day, is a bit of a nerd, and is the kind of man that people just seem to figure out is gay.  Sean is the local pest control guy, and uncle to two of Robert’s students.  They each find the other attractive, but there’s some misunderstandings and baggage to work through before they can settle into a relationship.

First off, let me warn you that this book is told from the first person point of view, and that Robert, our narrator has an ADHD style of thought that almost made me dizzy as I read.  That said, it’s hilarious.  So, just go into it knowing what you’re in for.  It works for me, but I don’t think I could read a bunch of J.L. Merrow stories back to back.  Here’s a quick example as Robert looks around, marching his class into an assembly:

“Thirty pairs of eyes (actually, twenty-nine and a half; Jodie was wearing a patch for her lazy eye) searched eagerly for the sight of parents and grannies.  I gazed out on the sea of female and/or wrinkly faces in the pews and wondered idly if there was any job in the world, anywhere, that was worse for meeting men than the average primary-school teaching post.  Father confessor in a nunnery, maybe?  Avon cosmetics rep?  Or one of those poor sods who went round emptying the sanitary bins they put in ladies’ loos?” p. 5

Robert is a bit of a geek; math jokes and Doctor Who references abound, and that made the story even more enjoyable for me.  Robert has a couple friends who round out the story and add to the hilarity.  Rosie is a fellow teacher working her way through a recent break up with her boyfriend.  She takes Robert on as a friend and project and works to hook him up with Sean.  Hanne is Robert’s grandmotherly neighbor who enjoys popping into his house and baking him things.  The exploits of Robert’s class round out the hilarity.

In a sweet twist, there’s a side story with one of Robert’s students and his father.  It made for one of those moments where you just sigh and think maybe the world is an ok place.

There are some more serious threads weaving through all the comedy.  Robert is dealing with some baggage from his previous job.  He also worries about coming out to Hanne and being gay in the small town he’s living in now.  I thought it was all really well handled.

The only thing that frustrated me in the story was that Robert sometimes seemed too oblivious or stupid.  I think that’s a risk you face when you have this kind of narrator.  The biggest obstacles to Robert and Sean’s relationship were all in Robert’s head.  Still, it worked for me overall.

If you enjoy m/m, or are wondering if you might, I’d recommend this book.  It’s hilarious and sweet – a story that will keep you laughing and smiling as you read!