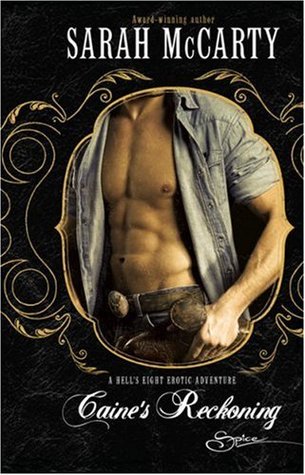 When Caine and his buddies ride in a rescue some women who have been kidnapped, Desi is the only one fighting the kidnappers.  And she’s the only one who doesn’t want to be returned to town.  She doesn’t want to return to her life as a sex slave.  When the reverend calls in a favor, Caine marries Desi and takes her back to his home.  But is there a way that Desi can recover from her violent past and become the wife that she wants to be for Caine?

This one has got that marriage of convenience trope that I adore, but with a kick.  Caine doesn’t really want to marry Desi, but he owes the reverend a favor and he’s a man of his word.  Plus he doesn’t feel he can really return Desi to the life she was living.  Desi is so strong.  Life hasn’t broken her.  It only seems to have made her stronger.  But there’s a fragility under her fighting surface and Caine is the one who finally allows her to start healing.

I have re-read this one more times than I can count.  There’s just something about this one that reaches out and won’t let me go.  There’s obviously quite a bit of drama dealing with Desi’s past, so if you’re looking for a light hearted, low conflict historical this isn’t it.  However, I would strongly recommend it to any fans of historicals with a bit of edge to them.