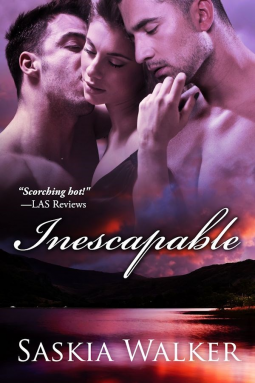 Lily and Adrian have been chatting online for a while now.  Hot, steamy, torrid chats.  They’ve decided it’s time they met in person.  But when Lily knocks on Adrian’s office door, she’s met by Seth (although she thinks it’s Adrian at first).  Seth is trying to convince Adrian to go into witness protection.  When someone makes an attempt on Adrian’s life, Lily sees them, and soon Seth is dragging both Adrian and Lily away to save their lives.  The three of them end up together in an isolated house with lots of time on their hands and just their lusty feelings to keep them company.

The premise for this one drew me in immediately.  Not being a huge suspense fan (even though I can’t seem to stay away from them), I’m happy to report that the suspense was not a huge part of this book, more just an excuse for the three of them to be alone together.  And when the suspense finally comes to its conclusion, it is not a long drawn out thing.  It happens and it’s over rather quickly.

I was really enjoying this one until Seth made a rather, in my opinion, idiotic move as a witness protection agent.  And everything after that just started to make me mad.  I struggled to get past how stupid he had been in that situation, when I saw other obvious options that were more logical but never crossed his mind. By the time I reached the end, I was just starting to forgive him.

If you like steamy menage with a touch of suspense (and you can overlook a stupid move by one of the heroes) give this one a shot.

One thought on “Inescapable by Saskia Walker”