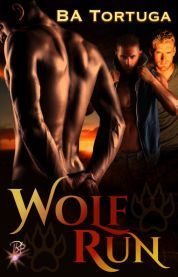 Grade: C
Hotness Level: Inferno
Kink Level: No Kink
Genre: Paranormal, Shifter, Triad, m/m/m
Published: 6/4/14
Reviewed by Anne
106 pages
Mick is a alpha wolf shifter who left his pack to travel alone.  He’s looking to set up new roots though, hoping start his own pack.  One day he comes across Scotty, a wolf shifter caged in a small yard running around like crazy.  When he offers to free Scotty, Scotty declines, explaining that he promised his mate Danny that he’d stay put while Danny was at work, since Scotty gets lost easily.  Mick is attracted to Scotty and has a strong urge to take care of him and keep him safe.  He wonders if Scotty and Danny might be the start of his new pack.
This was an impulse buy for me.  I was very interested in the set up and enjoyed the excerpt I read.  It started out as a good read, too.  I liked the way that the men’s wolf nature showed up in their human forms, too.  Scotty’s puppy-like hyperness was especially charming… until it hit me that puppies are babies or kids… and then I started having a hard time with it.  I want to be clear, Scotty is an adult in the story.  It’s just that his behaviors are so child like.  It just bothered me.
Also, I enjoy reading about committed triads.  It did catch me off guard that there was sex between Mick and Scotty before Danny had even met or heard about Mick.  That struck me as pretty odd, though it may have just been a part of the world building?  Maybe this wolf society is a lot more open with sex?
Speaking of sex, there were many sex scenes and they were hot and well written.  It did start to tip to the point of a little too much sex vs. plot, and the sex got a little repetitious.  As the book went on it started to drag for me, and I had to make myself finish the last quarter of the book.  There just wasn’t that much conflict or much left to be resolved.
So, it was an ok read for me.  I’d recommend it for people who like m/m shifters and a lot of sex.  I haven’t read a lot of m/m shifters, and I enjoyed that aspect of this book – please leave me a recommendation in the comments if you have one you like!