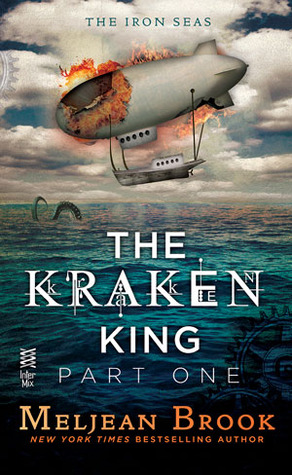 Grade: A
Hotness Level: Ember
Kink Level: No Kink
Genre: Steampunk, Serial
Series: Iron Seas #4.1 (Part 1 of 8 parts for this story)
Published: 4/15/14
Reviewed by Anne
78 ebook pages
So, I did something I swore to myself I’d never do… I started a serial.  I hate cliffhangers.  I’d rather wait a serial out and read the whole thing once it’s done!  But then I saw this one.  And it’s Meljean Brook.  MELJEAN BROOK!  And it’s in the Iron Seas world.  One of the coolest worlds I’ve read.  Best steampunk I’ve read.  And can I wait until August to read the whole thing??? No.  I cannot.  So here I sit, in the mess I made for myself, wanting more but having to wait until the next installment.  Because it was GOOD.

Zenobia Fox, author of the tales of Archimedes Fox and Lady Lynx has always lived in the adventures she writes.  Besides a couple kidnappings, she hasn’t traveled much.  But she’s off to see the world now.  She’s smart about it, though, as she’s travelling under an assumed name and taking her trusted body guards with her.

Not long into her journey, the airship she’s on is attacked and blown up.  She’s rescued by her bodyguards, her own coolheadedness, AND by the Kraken King.  Ariq, the Kraken King, goes by many names. He’s mayor of his isolated town and has been fighting off and investigating the group that took down Zenobia’s ship.  Zenobia and her friends take shelter in his town as they wait for another ship to take them on to their destination.

I don’t think there’s anything mind shattering about the plot as it seems to be standard adventure fare, but the book really shines in the relationship between Ariq and Zenobia.  They’ve got a lot of sexual tension and they don’t deny it! Acknowledging it doesn’t mean acting on it, necessarily.  They’re both smart, and they’re not going to make stupid decisions.  There is no TSTL in this story!  Zenobia not only depends on her bodyguards, but she listens to them!

I’m primarily a romance reader, so I appreciate the development of Zenobia and Ariq’s relationship, but the action sequences really rock, too!  The escape from the airship was a scene I could picture in a blockbuster summer movie!  Well written and exciting!  And I really want to see the dead Kraken on the beach!

My only complaint (besides the fact that it’s a serial, and that’s my own fault for being weak and not waiting it out…) was the misunderstanding set up in this installment.  I hope that’s cleared up soon.

I think this one would stand alone if you hadn’t read the rest of the series.  The characters are all new – Zenobia has been mentioned in other books, but not featured.  The world building is easy to catch on to.  So, go forth and enjoy!  Join me in the agony of waiting for the next installment!