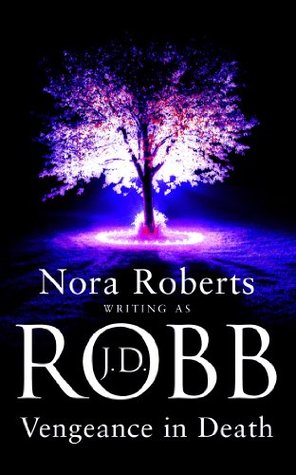 Eve and Roark were at it again. They were tracking a sadistic killer that had ties to Roark in his youth. The bad guy was a total whack job complete with a God complex. Or maybe he thought he was a messenger of God. Either way, he was a major creeper. Eve had her hands full skirting the lines of legality in this one. She had to trust McNabb who was covering for Feeney when he was on vacation. Trying herself to cover Somerset to protect Roark. Uncovering more of Roark’s checkered past and attempts on her life.

I really enjoyed this story because it was fast paced and they even went to Ireland. I enjoyed all the accents when they were in Roark’s homeland. I like that maybe in the future there will be some sort of a truce between Eve and Somerset.

As usual, I enjoyed the on going love story of Eve and Roark, Peabody and the rest of the gang. Still a good series and I will continue on after a short break.

2 thoughts on “Throwback Thursday-Vengeance in Death by J.D. Robb”