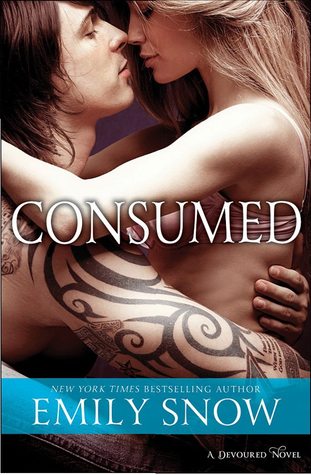 Grade-B+
Hotness Level-Inferno
Kink Level-No Kink
Series-Devoured #2
Genre-Contemporary
Reviewed by Kay
176 pages
Lucas is a rock star and he and Sienna have a troubled past. He threw her out of his house when she wouldn’t submit and then he ended up buying her Grandma’s house that was in foreclosure. That led to Sienna signing a contract to work for him for an appointed amount of time and then he’d sign the house over to her. She did this but then he freaked out about his ex-wife and dismissed her.

Now, he’s back and begs for Sienna to take him back bascially. She’s gunshy but she is in love with him. Head over heels in love. His ex is still causing trouble, malicious trouble but Sienna keeps it from Lucas because he’s on tour and she doesn’t want him disturbed. There were a lot of obstacles for this couple to overcome: the band, the tour, Cilla, Tyler and Sam (the ex).

I really liked this book even with the wait. I hope she writes about the rest of the band. I know she’s written about Kylie and Wyatt. When I first read this series early last year, it just spoke to me. I loved everything about it. The chemsitry, hot sex scenes and believable emotions. I fell in love with Lucas Wolfe for two reasons:

1.) He played Britney Spears for her on his guitar. He’s a heavy metal guy but Sienna likes Britney.

2.) He says this to her- “I could have the shittiest day and then come within a hundred feet of you, and the only thing that matters is you.”

If you want something sweet and hot, read it.