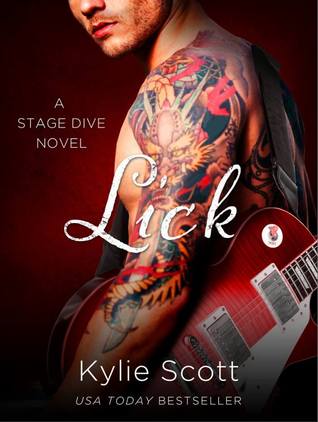 This was probably closer to a 4.5 star rating for me. I really enjoyed this book and its characters. I’m kind of a sucker for a rock star romance and this one fit the bill. Not in an over the top way but what felt natural.

Evelyn wakes up in Las Vegas hungover and married to a tattooed, sexy man. She has no real memories of the night before. She fights vomitting and panic at the mere sight of him. She vows no more alcohol and says their marriage was a mistake. David, her husband slams the door as he leaves. The press shows up at the airport and the secret wedding is now known by all. She’s married to the guittarist of Stage Dive.

David sees the media’s attention focused on Evelyn and he sends for her stating that she needs to sign the divorce papers any way. She walks into a party already in session, sees her husband cozied up to a busty blonde, and is ushered away as if she’s a shameful secret. She then sees her husband go off into the poolhouse with the blonde. She meets with his lawyers the next day and oh boy.

This really was a well done book. More emotional than I thought it would be. Funny at times and frustrating at others. My reason for this not being a five star read is that David took too long getting to her after he hurt her so badly. It was said it was all innocent but he allowed himself to be in bad positions with other women and it made me want to punch him in the throat. I wish I could say more about the book but it’s a great journey for these two and you should read it yourselves. I wish the sex would’ve been more descriptive but it was still steamy. I’m definately reading more in this series.