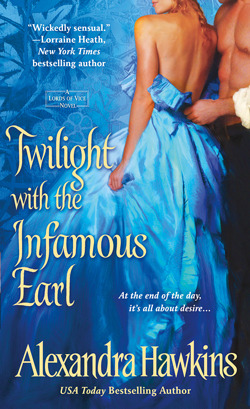 Lord Chillingsworth aka Frost is a scoundrel of the highest order. A fighter, gambler and a man-whore. His seduction skills are almost legendary as his friendship with his friends. The infamous Lords of Vice, well former Lords of Vice. He is the only unmarried one now and some of his friends are also fathers. This fact still boggles Frost’s mind. In this story someone is trying to take away the Lords club, Nox. Frost and his cohorts know who it is but don’t take the man seriously at first. There’s something else that has Frost’s attention.

Emily Cavell is on a mission. Her mission is to destroy a man named Frost. Her sister whispered his name as she lay dying at her own hands. Emily makes her sister a promise to avenge her heartbreak against the man who seduced and ruined her. See, this is Emily’s Season as she is almost on the shelf at age twenty. While her family searches for her a husband, she searches for Frost. After a chance meeting with Lord Chillingsworth (she doesn’t know that he’s Frost) she finds herself attracted to Chilllingsworth.

There was a little mystery to this novel and I enjoyed it. I read a few online reviews before starting this that were less than favorable. Honestly, I don’t agree with those reviews. This was a good book and a nice finish to the series. Frost was his usual self and Emily a great opposite for him. Scenes with the other Lords and their families were entertaining. You also got a little more of Frost’s backstory, which was nice since he’s always been so aloof. I have so enjoyed this series and it has always been an auto-buy for me. I will miss it and hope to have the time to someday re-read it. If you want a steamy historical series, this is it for you.

One thought on “Twilight With The Infamous Earl by Alexandra Hawkins”